Scouting is a worldwide youth movement.

International and long-distance scout jamborees are held every 3-4 years. 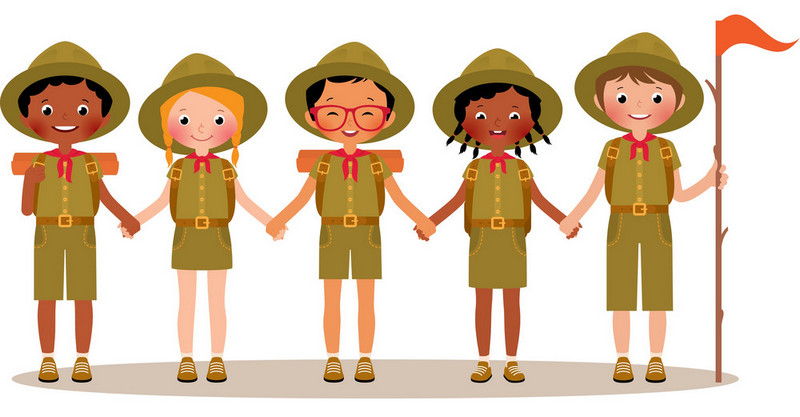 The founder of the scout movement is Sir Robert Stephenson Smith Baden-Powell. In 1899, Colonel Baden-Powell was appointed commandant of the Mafeking Fortress in South Africa, which, after the outbreak of the Boer War, was besieged by the Boer Army. There were a little more than a thousand soldiers in the garrison, and the colonel organized an auxiliary military unit from the local boys, who took upon themselves the reconnaissance and delivery of reports through enemy positions. The colonel was amazed that the boys fought no worse than adults, were distinguished by courage, cunning, and diligence. Thanks to his cadets, Baden-Powell managed to hold out with a tiny garrison for 207 days until reinforcements arrived. From that moment, the colonel came to the conclusion that it was necessary to start training military intelligence from childhood. Having become a general and returning to England, Baden-Powell founded the scout movement in 1907 in Great Britain. In 1907, the first camp was held on the island of Brownsi, and in 1908 the world-famous book Scouting for boys was published.

The innovation of scouting was that it connected children and adults in one organization, in the process of joint activity, a common long-term game of scouts, in an effort to be useful to other people, nature and the world as a whole. In Baden-Powell, relations between adults and children were built on an equal footing, where an adult and a child played each role, the child voluntarily agreed with the position and role of an adult as an older comrade, who is more knowledgeable, more skilled. The adult led the younger. So, the problem of antagonism between adults and children in the scout organization was partially solved . Baden-Powell understood the desire of children and adolescents for informal communication, he caught their desire to unite among themselves to realize their interests and needs. The universality of the scouting system lies in its self-development. It united teenagers and adults in one organization, regardless of religious denominations, various races and ethnic groups, not only Catholic Europe, but also Orthodox peoples, the Muslim world. In fact, scouting laid the foundation for a new type of pedagogy, which later became known in the USSR as informal pedagogy as opposed to formal (compulsory) school education.

However, the invention of the idea itself belonged not to Baden-Powell but to the writer and artist Ernest Seton-Thompson, who created the world’s first children’s detachment, “Woodcraft Indians”. Seton-Thomson colorfully described the history of the creation of the detachment in his biography, in the chapter “Forest Experts”. In 1906, Seton-Thompson sent his notes to Baden-Powell, who relied heavily on the writer’s experience, creating scouts. Baden-Powell created a completely new public youth organization. For these services, he was elevated by the King of England, George V, to the rank of Baron with the title “Lord of Baden-Powell of Gilwell.” Initially, scouting was conceived to prepare the boys for service in the English army, and the military of different countries largely adopted its system. At first, scouting as a method of educating young people of pre-draft age was spread among the countries of the Entente, but then it went beyond this framework and became more widespread among the countries of the world because of its universality. By 1909, there were already 14,000 scouts in England.

A great contribution to the movement of scouts was made by the artist Pierre Joubert, who himself became a scout at the age of 14. For decades, he created magnificent illustrations for books and magazines about scouts.

The development of the scout movement was also influenced by the work of Daniel Carter Bird.

The motto of the Scouts is “Be Prepared!”, it is abbreviated to the first letters, just like the name of the founder of the Scout movement (B.P.).

The origin of this phrase is connected with the initial patriotic character of the scout movement. Baden-Powell wrote on February 12, 1908, in an article in the Boy Scouting magazine: “Be prepared to die for your country if necessary; so when the time comes, leave the house with confidence and without hesitation about whether they will kill you or not. ”

One of the principles of the scout method is life based on promise and scout laws. Each person joining scouts makes a promise.

The basis of the promise is 3 principles on which all scouting is based:

Scout promise: “I honestly promise that I will fulfill my duty to God and the Motherland, help my neighbors and live according to the laws of scouts.”

Scout emblem is a three-petalled lily. It is used by 16 million scouts in many countries of the world. The three ends of the lily represent the three elements of the Scout’s oath: duty to oneself, to neighbors, to God.

Scout emblems of different organizations may vary significantly. But all of them have an obligatory element – a three-petalled lily.

Scouts all over the world shake hands with their left and not their right hands, which is a sign of special friendship and faith. This is explained by the fact that the founder of the scout movement Robert Baden-Powell borrowed this custom from African tribes during his military service in Africa. During the greeting, the spear held in the right hand was stuck into the ground, and the shield was shifted from the left hand to the right, thus showing that you trust the person you greet.

The Scout salute is given in full uniform and in solemn occasions, such as raising and lowering the national flag, and when pronouncing the Scout promise. A variant of this salute symbol is a scout sign, during which the right hand rises to shoulder level, two fingers – thumb and little finger are connected, two or three, depending on the age of the scout, are tightly compressed (index, middle and nameless). Three fingers symbolize the three basic principles of scouting. The thumb and little finger, joined together, indicate that in scouting the elder helps the younger ones.

Each scout patrol has its own flag. The larger elements of the scout movement (detachment, squad, regional, national organization) have their own banner.

The call should be simple and short and should express the general mood, common goals and joint activities.

A tie is a distinguishing element for each scout group; color can be varied depending on the organization, gender, rank, can have the colors of the flag, coat of arms of the city, region, country. A scout tie is fixed with a clip, which the scout makes from leather, wood, bark or other natural materials.

Special signs in the form of stripes, badges, ribbons and cords, which the scout wears on his uniform, indicate his affiliation with a particular organization, his position in it, his membership in a squad, detachment, unit. Also, according to the scout form, one can determine the achievements, rank of the scout or the “specialties” handed over to him, for example, in cookery, first aid, sports improvement, etc.